This rule is sure to save lives because now a vehicle will not pass the annual inspection with a missing or damaged rear impact guard. Any operation of the vehicle with a missing or damaged rear impact guard would be a violation of the FMCSRs. It is this author’s understanding that a Commercial Vehicle Safety Alliance (“CVSA”) inspection decal will not be issued if the vehicle demonstrates a rear-guard deficiency. It is hoped that the CVSA criteria will then designate the commercial vehicle as “out-of-service” until the rear guard is fixed or replaced.

This comment is in support of the annual inspection requirement for rear impact guards and rear impact protection. As stated, the NPRM’s amendments “are primarily technical changes that clarify existing requirements and improve enforcement consistency…” As this rule intends, rear impact guards will be included on the list of items in Appendix G of components that must be examined during the annual inspection required by 396.17. This rule is sure to save lives because now a vehicle will not pass the annual inspection with a missing or damaged rear impact guard. Any operation of the vehicle with a missing or damaged rear impact guard would be a violation of the FMCSRs. It is this author’s understanding that a Commercial Vehicle Safety Alliance (“CVSA”) inspection decal will not be issued if the vehicle demonstrates a rear-guard deficiency. It is hoped that the CVSA criteria will then designate the commercial vehicle as “out-of-service” until the rear guard is fixed or replaced.

Since the rear impact guard has been designated as a “safety critical” component, it would be helpful if the rule mandated that the replacement of the missing or damaged
rear impact guards be upgraded to meet the IIHS ToughGuard standard. Utility Trailer Manufacturer just announced that it has a retrofit kit that can be installed on Utility Trailers (hyperlink included) manufactured between 2002 to the present.

It further announced that this retrofit kit meets the IIHS ToughGuard standard. Utility Trailers even goes as far as citing this NPRM in its announcement. Many, if not most, of the major trailer manufacturers have retrofit kits for rear impact guards that meet the IIHS standard.

On February 26, 2021, Sean O’Malley, IIHS Test Coordinator, gave a presentation to a joint Side Guard Task Force that was attended by engineers, truck industry representatives, and crash victims. In Mr. O’Malley’s presentation, he brought attention to the fact that all the major trailer manufacturers have earned the IIHS ToughGuard standard recognition for rear impact protection. However, several of the trailer manufacturers have simply made the stronger guards as optional equipment.
He stated, “that if all major trailer manufacturers would make the ToughGuard rear impact guard ‘standard’ equipment on all new trailer purchases, then 98% of the new
trailers on the road would meet the IIHS ToughGuard safety standard.” He presented with enthusiasm statistics demonstrating that 500,000+ trailers sold between 2015 and 2020 have the “stronger guard.” He further stated, “[e]verything we do here, we do to save lives and the rear underride program (ToughGuard) is what I’m most proud of.”

This NPRM proposes “to amend the labeling requirements for rear impact guards, and to exclude road construction controlled (RCC) horizontal discharge trailers from rear impact guard requirements.” NHTSA is wrong to have amended the applicability section of FMVSS No. 224, “Rear impact protection,” to exclude RCC horizontal discharge semitrailers from the requirements of the standard. Why did NHTSA do this? This question is being asked because rear impact guards are on similar trucks called “tippers” on “lorries” in the United Kingdom. This author traveled overseas twice to the Commercial Vehicle Show in Birmingham, England. Once in 2015 to meet with a member of Transport Research Laboratory of London to examine various side and rear guard. Many of the following images were taken at the Commercial Vehicle Show depicting rear impact guards on various trucks that this rule making is attempting to exclude. 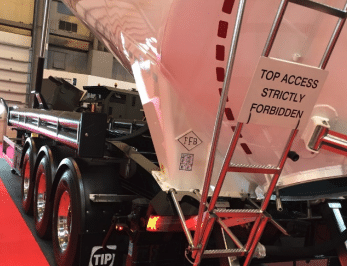 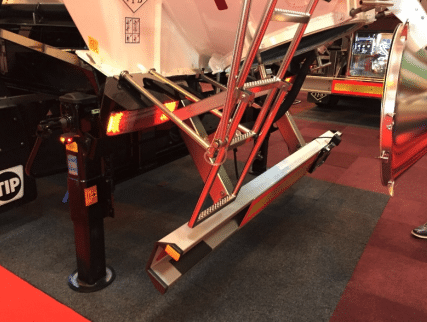 The photographs above show a semi-trailer being lifted in the air and the rear guard is still in place. As also can be seen in the images below, one vendor at the Commercial Vehicle Show had a display of a variety of aftermarket rear impact guards that can be installed on trucks and trailers. Several of the guards on display were adjustable and could be manually moved up and down. These rear impact guards can and should be installed on the types of trucks this NPRM intends to exclude. 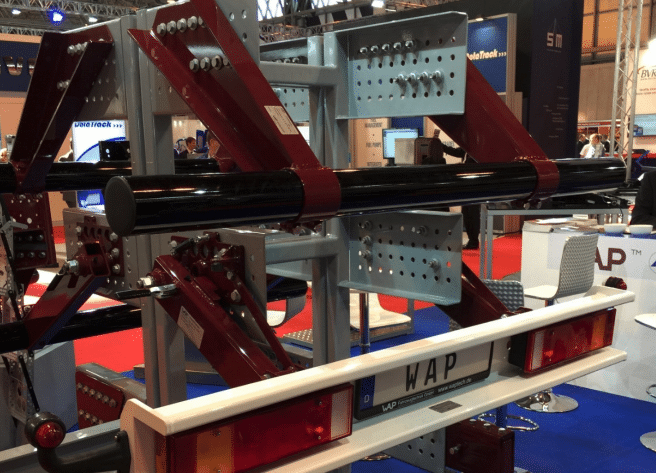 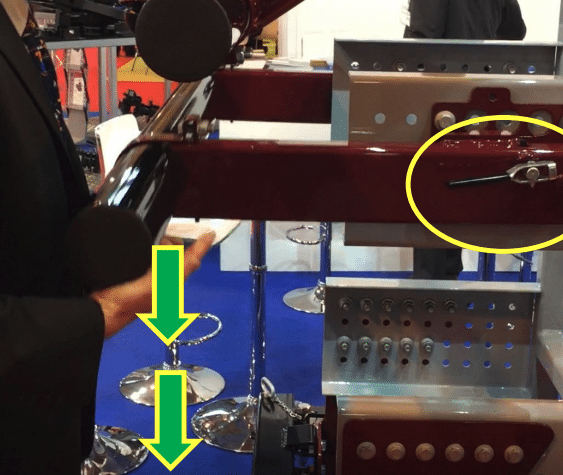 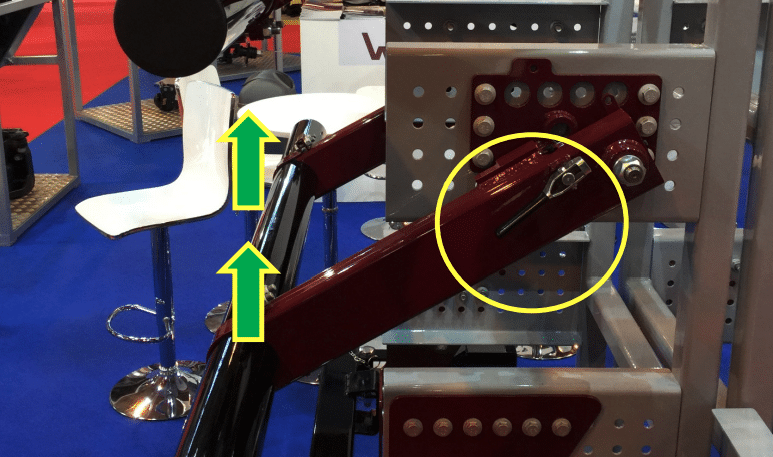 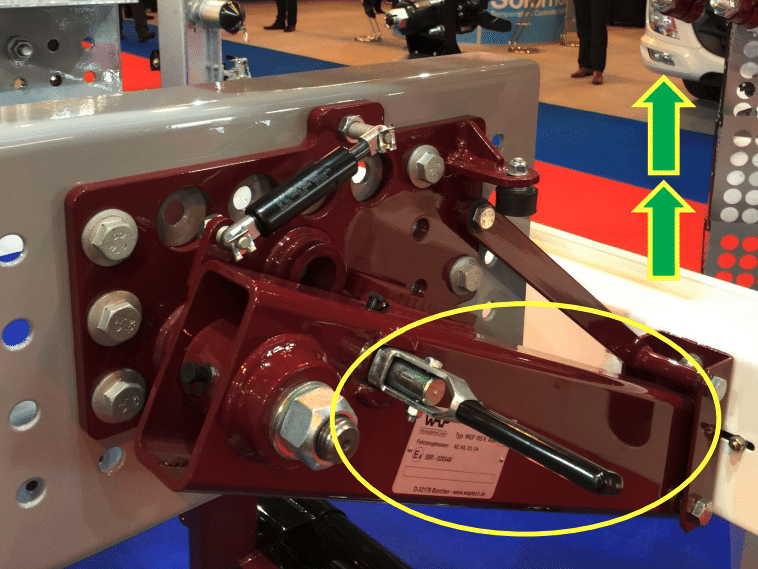 The lever for the adjustable guard can be seen in the last few images. The yellow circle shows the lever. The arrows show that the rear impact guard can be adjusted upward to aid in ground clearance and to raise it out of the way to allow for unloading of asphalt or other aggregate at the time of horizontal discharge. The author of this comment also took video of the above vendor demonstrating the ease of the adjustable nature of the rear impact guard. By contacting this author, the video can be easily shared with this agency’s representatives reviewing this comment.

The NPRM specifically references trailers used to deliver asphalt to road construction sites and gradually to discharge asphalt mix into paving machines as part of the exclusion. Unfortunately, asphalt delivery trucks are not immune from rear-end strikes resulting in crash fatalities. The photographs below depict a car that struck the rear of a commercial vehicle delivering asphalt resulting in passenger compartment intrusion and the death of a minivan driver. The crash depicted occurred in Ohio on September 23, 2017. 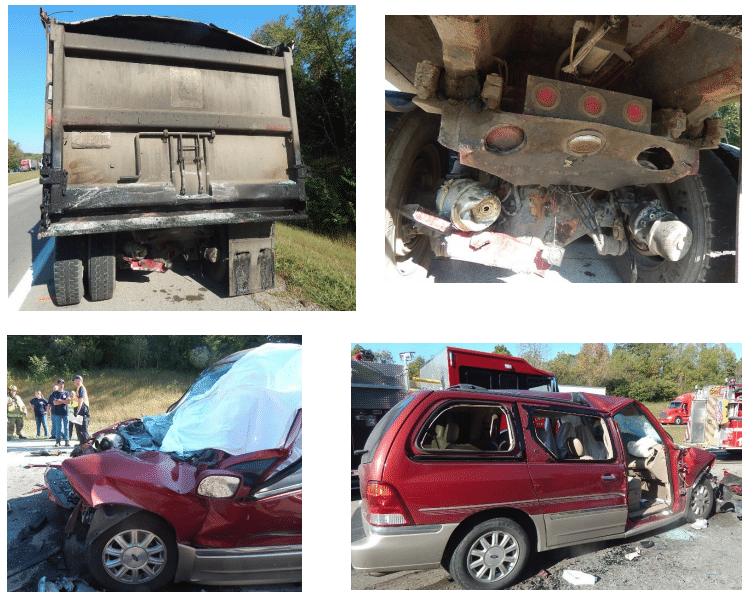 Seen here are additional examples of commercial motor vehicles in Europe with rear impact guards, including construction and off-road trucks as well as medium duty trucks. 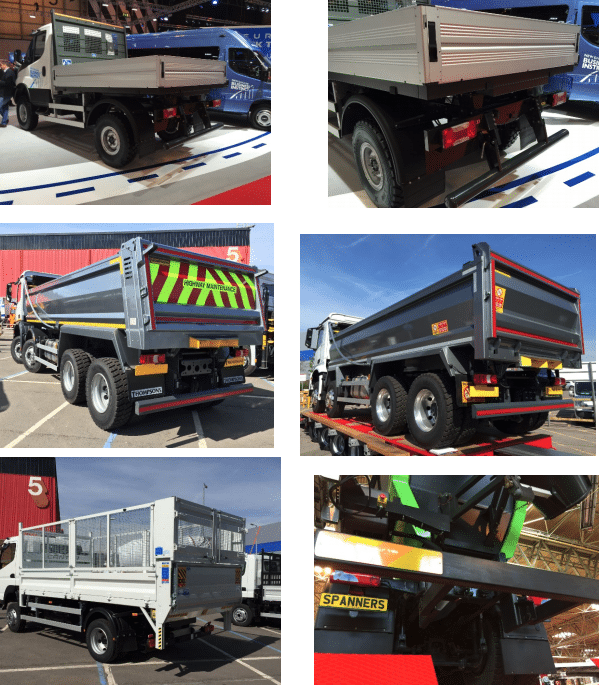 As evidenced by all photographs herein, the U.S. lags far behind other developed nations in providing meaningful rear impact protection. The images above are just a small sampling. So, the proposed amendment to the labeling requirements should be taken out of the NPRM and both the FMCSA and NHTSA should require that all commercial motor vehicles meet global standards and requirements for rear impact safety.

TRAILER MANUFACTURERS SHOULD MEET IIHS’ TESTING TO THE SIDES OF TRAILERS 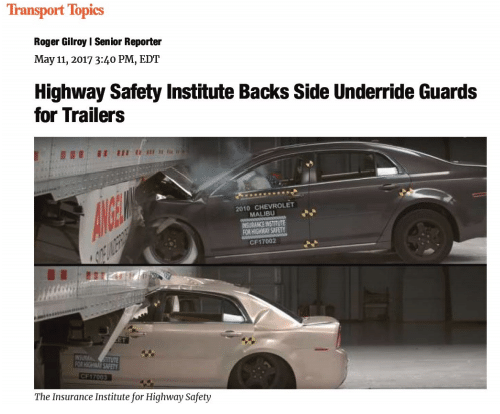 To maintain credibility, trailer manufacturers should do exactly what was done with the rear of a trailer and answer IIHS’ call to protect the sides of trailers without a regulatory mandate to do so. Unfortunately, The IIHS has been calling for underride protection as far back as 1977 when IIHS’ President William Haddon, M.D., testified before the U.S. Senate warning, “[b]lood has been shed, heads literally have rolled and countless thousands of Americans have been injured because these agencies did not act. Further inaction would be inexcusable.” The Chief Sales Officer at Hyundai Translead told Transport Topics, “[i]f the government makes them mandatory, we would, of course, do our best.”

It is hoped that this NPRM is only the first step to further action. If the FMCSA and NHTSA feel that protecting the rear of a trailer is as important as this regulation suggests, how many more lives must be lost at the side of a trailer due to side underride?

In this technologically advanced country of ours, it is difficult to accept the fact that as a nation we are decades behind protecting our motorists from underride and/or override crash scenarios. Both NHTSA and the FMCSA should be applauded for additional efforts to protect the rear of semi-trailers, but the same needs to happen for the rear of single-unit trucks and the sides of trailers. This comment is also in support of the anticipation of future regulatory action to extend the requirement for underride protection to the sides of large vehicles as predicted, on the record, by these agencies 52 years ago. (Federal Register, Vol. 34, No. 53 – Wednesday, March 19, 1969). While this comment supports the primary goal of this NPRM, it cautions and opposes the need to amend the labeling requirements for rear impact guards to exclude road construction controlled (RCC) horizontal discharge trailers from rear impact guards. We need to make sure that our citizens have the same protection as those in other nations.

If you have any questions, the author of this comment can be reached at [email protected].