Earlier this year, the Federal Motor Carrier Safety Administration announced its intent to move forward with speed limiter rulemaking. At the Law Firm for Truck Safety, we applaud this move as we believe speed limiters are imperative to the safe operation of commercial vehicles on our Nation’s highways.

What are Speed Limiters?

A speed limiter –or speed governor as it is sometimes called— is a safety device that limits a vehicle’s top speed. When a speed limiter is activated, a truck cannot move faster than the speed set by the limiter. This can help truck drivers on long trips ensure they are maintaining safe road speeds while en route to their destination.

How do speed limiters save lives?

Opponents of speed limiters may argue that limiting the maximum speed of trucks limits their ability to keep up with the flow of highway traffic, increasing the risk semi-trucks pose to US drivers. Not only does data suggest otherwise, but those who make this argument conflate speeding with overall speed, and in doing so, sidestep the core safety issue speed limiters are designed to address: a faster semi-truck is a more fatal semi-truck.

Examining the number of truck crash fatalities from 2010-2019, fatal crashes involving a speeding truck stay roughly around 18.5% of the aggregate. While we strongly believe that 18.5% should –and can be– 0%, it is a trendline that has held relatively constant over the years. 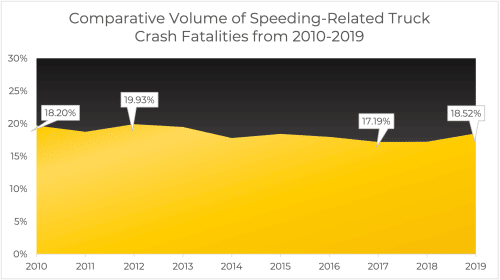 Looking at the data, it’s difficult to ignore that the faster a truck travels, the greater risk it poses to lives. And that’s the bottom line.

Please direct all inquiries, comments, and responses about this comment to its author,
Andy Young | [email protected]